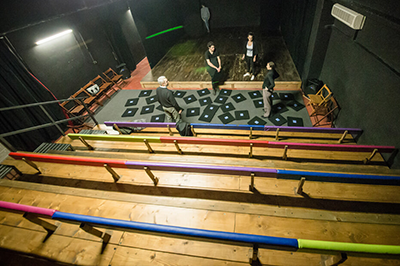 The constant fundraising and communication activities, the engagement with private companies, charities and citizens have transformed LiNUTILE in a true cultural enterprise, allowing it to reach its goals and fulfil its mission.

The result of a creative conversion of a former traffic lights factory, the building still shows some of the features of its previous function.

The theatre, located in Via Agordat, 5 in Padua, has contributed to transform a neighbourhood which has recently been characterized by a lively cultural buzz and has attracted ballet and music schools, photography and communication studios, television productions, co-working, bars and clubs. Stefano Eros Macchi, born in 1973, son of the renown television director Eros Macchi and nephew of Sandro Giovannini of the Garinei e Giovannini fame, has always been active in the field of the performing arts.

He attends the triennial school directed by Beatrice Bracco which is followed by a specialist course at the “Ecole Internationale de Mimodrame de Paris Marcel Marceau” and at “Centro Teatrale Santa Cristina” directed by Luca Ronconi.

Stefano has worked both as a stage actor and a film actor. In 2006 he is the founder, together with Marta Bettuolo, of “Teatro de LiNUTILE”, where he is Art Director and Adminsitrative Manager. Graduated in acting in 1999 at “Teatro Stabile del Veneto” and in 2003 at “Scuola del Teatro Stabile di Genova”. In 2003 Marta is awarded the HYSTRIO Prize to vocation.

In 2006 she is the founder, together with Stefano Eros Macchi, of “Teatro de LiNUTILE”, where she is Art Director and Adminsitrative Manager.